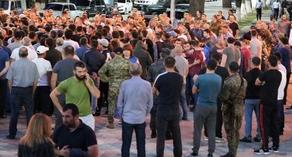 Inal Jabaev, an inmate charged with the assault on de-facto Minister of Internal Affairs Igor Naniev, has passed at a pretrial detainee's cell in the breakaway region of Abkhazia.

The inmate was unconscious when hospitalized and died without regaining consciousness.

The investigation into the case was launched under the article envisaging criminal abuse of power.

The man's death triggered protests in Tskhinvali, and the so-called president of Tskhinvali Anatoli Babilov signed the decree on dismissing the interior minister.

An extraordinary session has been convened at the so-called parliament, at which the issue of changing the government is being discussed.