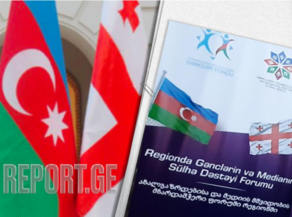 International Forum called 'Media and Youth Support for Peace in the Region' has been launched in Georgia. The Youth Foundation of Azerbaijan has provided the Forum with financial support, and the Public Union for Youth Initiative and Development has organized it.

The Embassy of Azerbaijan in Georgia released a statement in connection with the Forum, which is presented below:

The Forum 'Media and Youth Support for Peace in the Region' started at Akhundov Cultural Center of Azerbaijan.

At the event opening ceremony, the Chairman of the Public Union for Youth Initiative and Development, Toğrul Allahverdili, thanked the Youth Foundation for supporting the project.

In Allahverdili's words, lots of work is necessary to integrate both countries' media and young people.

The Chairman of the Public Union thanked Ambassador Faig Guliyev for the positive changes implemented for the last years.

Tamerlan Tagiyev, the Secretary at the Embassy of Azerbaijan, Zaur Dargali, an MP at the Parliament of Georgia, Zaur Osmanov, a representative of the Youth Foundation of Azerbaijan, Vugar Mammadov, the Head of the Department at The State Committee for Diaspora Affairs of the Republic of Azerbaijan, Guram Markhulia, the Professor of Sokhumi State University, and a Karabakh war veteran journalist Nahid Janbakhishli discussed the role of the media and youth in bringing peace.

Real TV employees, Karabakh war veteran Ismail Huseinov, Oxu.az journalist Kubra Maharramova, Report.ge employee Anano Nikoladze, Vasil Papava, the Director of the Georgian Institute of Middle East and Caucasus Studies, were present at the conference. They focused on Georgia-Azerbaijan relations, the role of the media, the positive influence of the Karabakh war victory on the region, and information warfare.

Panel discussions were held afterward, and at the end of the Forum, memorable gifts 'Xarı bülbül' were presented to Georgian guests at the ceremony, which was organized by the Public Union for Youth Initiative and Development.

The official partners of the event are the Embassy of Azerbaijan in Georgia and the Foundation for Azerbaijani Diaspora.''