Irakli Gharibashvili: Georgia has always been a supporter of peaceful cooperation and coexistence in the South Caucasus 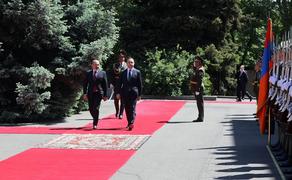 "The stability and democratic development of Armenia is extremely important for our country and the whole region," the Prime Minister of Georgia Irakli Gharibashvili stated during his official visit to Yerevan at a joint briefing with the incumbent Prime Minister Nikol Pashinyan.

As the head of the Georgian government noted, Georgia has always favored peaceful cooperation and coexistence in the South Caucasus, and this course will continue in the future.

"We are ready to facilitate regional dialogue on issues such as economy, trade, culture, other humanitarian issues. The Georgian people have chosen the European and Euro-Atlantic path in order to strengthen stability, peace, and democratic values," Irakli Gharibashvili said.

According to the Prime Minister of Georgia, all the main directions of cooperation were discussed at the meeting.

"We talked about the prospects for the development of existing trade and economic relations, new projects. We also talked about cooperation in areas such as transport, energy, tourism, culture, education, innovation, and despite the already intensive relations, there is still great potential in many areas," said Irakli Gharibashvili.

The Prime Minister of Georgia Irakli Gharibashvili is paying an official visit to Armenia.

According to the prime minister's press service, an official welcoming ceremony was held at the residence of the Government of the Republic of Armenia.

Nikol Pashinyan hosted the head of the Georgian government. The national anthems of the two countries were performed.