Irakli Gharibashvili: I had a very fruitful meeting with President Michel 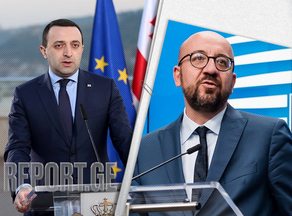 Prime Minister Irakli Gharibashvili said he had briefed Charles Michel, the President of the Council of Europe, on how the country was fulfilling its obligations under the April 19 agreement.

According to the Prime Minister, he asked Charles Michel to send as many observers as possible to the upcoming elections in Georgia under the auspices of the European Union.

"I told him that, unfortunately, to date, a large part of the opposition has not signed the agreement, which is a very big obstacle to stabilizing the political situation and calming the situation in general.

I also had a conversation with President Michel about electoral reform. I told him that we had worked out an almost complete electoral reform involving the opposition. I also talked to him about justice reform. It is not perfect, but we will bring this reform to an end," he said.