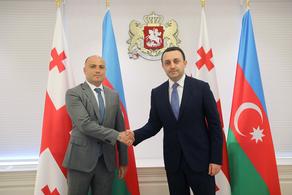 The Prime Minister of Georgia Irakli Gharibashvili met with the Minister of Culture of Azerbaijan Anar Karimov.

As report.ge was told in the government administration, the situation in the region was discussed at the meeting.

"The agreement reached between Azerbaijan and Armenia through the mediation of the Prime Minister of Georgia was underlined at the meeting. Minister Karimov thanked Irakli Gharibashvili for the successful mediation, as a result of which 15 Armenian citizens were released, and maps of the mined territories were handed over to the Azerbaijani side. The Head of Government reaffirmed his readiness to continue to play the role of mediator in order to facilitate the dialogue process aimed at the peaceful settlement of conflicts in the region. The conversation also covered the development of bilateral ties in culture," the government administration said.

The Ambassador Extraordinary and Plenipotentiary of the Republic of Azerbaijan to Georgia Faig Guliyev, Azad Jafarli, the Head of the State Service for Protection, Development, and Restoration of Cultural Heritage Monuments of the Ministry of Culture of the Republic of Azerbaijan, attended the meeting. From the Georgian side, the meeting was attended by the Minister of Culture, Sports, and Youth Tea Tsulukiani.