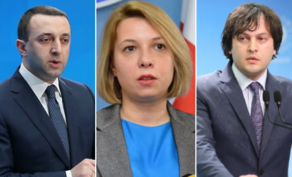 PM Irakli Gharibashvili said that Georgian authorities knew Mrs. Lomjaria did not represent the government, which is precisely why they appointed her to the post.

In Gharibashvili's words, the US and European countries trust and respect the ombudsman's institute in general, not specific individuals, but the institute.''However, ombudsmans' biased statements may also become a focus and judgment passed on their actions. In this specific case, I would share the party chairman's statements by saying that, unfortunately, the public defender's position fails to match the reality and are often unfair,'' PM Gharibashvili declared.

Irakli Kobakhidze defined the opinion by the panel of doctors under the public defender as fake, adding that legal proceedings may be instituted against them.