Irakli Gharibashvili: We removed the party of murderers from the government in 2012 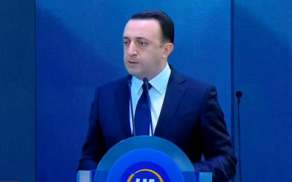 The Prime Minister of Georgia, Irakli Gharibashvili, addressed the public at the rally organized by the Georgian Dream, which is currently taking place on Freedom Square, and recalled the 2012 parliamentary elections:

"Today, on Freedom Square, we gathered people fighting for freedom, who in 2012 showed the strength and wisdom of the Georgian people here, the strong desire of the Georgian people to live in a fair, free, democratic, peaceful and stable state, where fundamental human rights, dignity, and freedom are protected, where people and his life are the most important values. We have established the values that rule the country to this day. We are the government that has been able to ensure peace and stability for the longest time in the history of independent Georgia. The government listens and feels the heartbeat of the citizens. The government serves the people," Irakli Gharibashvili said.