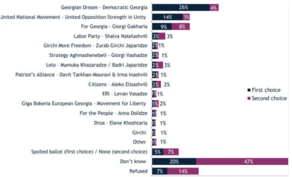 "According to a new poll by the International Republican Institute (IRI), 26% of respondents would vote for the Georgian Dream, 14% for the United National Movement, and 9% for Giorgi Gakharia's party if elections were held next week.

The study was conducted on June 15-30, 2021, on behalf of the Research Center of the International Republican Institute by Dr. Rasa Alisauskiene, a Baltic Studies and Gallup Organization representative, and IPM conducted the fieldwork. Data were collected using a stratified multistage random sampling method through face-to-face interviews. The sample included 1,500 respondents with voting rights and age. Data were weighted by age, sex, region, and settlement size. The margin of error is +/- 2.5%; the response rate is 74%. The study was made possible by the support of the American people through the United States Agency for International Development.