James Appathurai: These events are step backward for Georgia 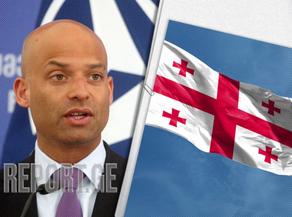 In Appathurai's words, he denounces violence that is against NATO norms and values, including freedom of gathering, rights of minorities, and respect for media. '' These events cause disappointment and are step backward for Georgia,'' he told Radio Tavisupleba.

On July 5, opponents of Tbilisi pride attacked journalists. The MIA of Georgia said that following the investigation activities, they determined that violent crimes were committed against 55 citizens, with 53 being representatives of different media outlets.

Far-right attacks were also carried out against representatives of various media outlets yesterday.