Jens Stoltenberg: We continue to call on Russia to respect the territorial integrity of Georgia 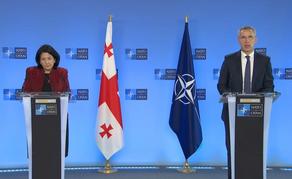 "The decision of the Strasbourg court only strengthens our call on Russia to respect Georgia's territorial integrity," the Secretary-General of North Atlantic Treaty Organization said at a news conference after a meeting of the NATO-Georgia Commission and a meeting with the Georgian President in Brussels.

"The Strasbourg court ruling states that Russia is guilty of abusing human rights in South Ossetia and occupied Abkhazia, which only reinforces our call on Russia to respect international law and Georgia's territorial integrity," Jens Stoltenberg said.

In the case of the 2008 war "Georgia vs. Russia," Georgia won a dispute with Russia.

Georgia filed the lawsuit in August 2008, alleging that Russia had violated Article 8 of the Convention.

Look up the decision of Strasbourg court.