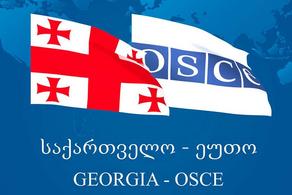 According to the Ministry of Foreign Affairs of Georgia, the Group of Friends of Georgia have approved the statement supporting Georgia at the 27th OSCE Ministerial Council.

We reaffirm our unwavering support for Georgia's sovereignty and territorial integrity within its internationally recognized borders.

Twelve years since Russia's military invasion, we are still deeply concerned over Russia's occupation of Georgia's breakaway regions and stress the significance of peaceful resolution of the conflict.

We call upon the Russian Federation to reverse its recognition of the so-called independence of Georgia's Abkhazia and South Ossetia regions.

We appeal to the Russian Federation to immediately fulfill the obligation assumed within the framework of the EU-mediated 12 August 2008 Ceasefire Agreement. We call upon it to withdraw military forces from Georgia's occupied territories, inter alia, to fulfill its obligation to ensure the unimpeded provision of humanitarian aid and hold back from hindering the implementation of international security instruments in the region.

We are concerned over provocations by the Russian Federation, Sukhumi, and Tskhinvali  underway even against the pandemic.

We support the OSCE's engagement in the peaceful resolution of the conflict in Georgia. We are sorry for the closure of the OSCE Mission to Georgia and call upon the OSCE member states to restore the multi-dimensional OSCE Mission to the country.

The Group of Friends of Georgia is staying informed about the conflict-related issues and the latest developments in the region, assigns Russia the obligation to fulfill the assumed duties, and supports peaceful resolution of the conflict," the statement reads.