Juansher Burchuladze: By the end of the year we will receive modernized air defense systems 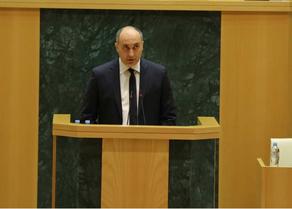 "We are taking important steps to strengthen our air defense capabilities in order to maintain resilience and the ability to fight a superior rival," the Minister of Defense of Georgia Juansher Burchuladze stated during the report in the format of "Minister's Hour."

Burchuladze briefed the legislators on the ongoing processes in the air defense capabilities.

"By the end of this year, we will receive a modernized Rafael air defense system. It is also planned to purchase a modern portable anti-aircraft missile system, which will equip the maneuvering units. It will naturally make the tactical units of the Georgian Defense Forces more efficient."

In the modernization of the existing systems, Juansher Burchuladze spoke about the French contract, the second phase of which will complete in 2021.

"We will introduce a modern management, control, and communication (C3) system, which will facilitate future integration into the management and control system in NATO," said Juansher Burchuladze while talking about air defense capabilities.