Kakha Kaladze: I do not see threat of civil conflict 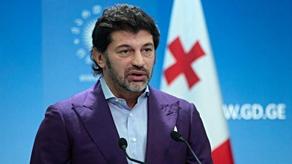 “I really do not see the threat of civil conflict”, Kakha Kaladze, the Mayor of Tbilisi told reporters while talking about the ongoing protests in the country and the conflict that took place outside the Georgian Dream office.

“There was a little controversy. I urge everyone to remain calm. This energy that people have can be used for our better future and development of the country”, Kaladze said.

Kaladze thinks that opposition activists were unreasonable while protesting outside the office of the Georgian Dream, when they saw that the members of the ruling party were on the territory of their party's office.

The Mayor of the capital thinks that the opposition deliberately chooses the office of the Georgian Dream for the protest to provoke a confrontation.

A physical confrontation between representatives of the ruling party's youth organization and civil activists took place at the office of the Georgian Dream yesterday.