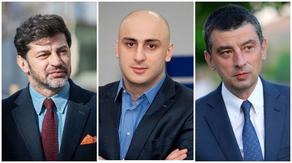 According to Giorgi Amilakhvari, Kakha Kaladze has a very strong opportunity to win the elections convincingly in the first round.

"To the question, which candidate would you vote for if the Tbilisi mayoral elections were held tomorrow, the answers were distributed as follows:

1.7% was distributed among other candidates.

According to the Georgian Dream, the sociological research fieldwork was conducted on September 16-20. 2 792 respondents were interviewed as part of the study. The margin of error is 3%.