Kakha Kaladze: We need to visit congressmen and provide the right information - VIDEO 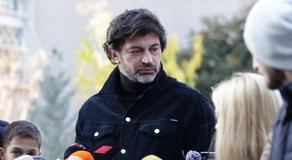 "We should work with the congressmen, communicate with them, to provide information, because the letters received contained inaccuracy," Kakha Kaladze, the Mayor of Tbilisi, told report.ge, responding to letters from US members of Congress and senators.

According to the Mayor, it is necessary to visit the congressmen and provide them with the right information.

"For me, the statement of official Washington, State Department is important. We heard assessments of the processes, reforms, challenges in Georgia," Kaladze said.

The UNM member, Salome Samadashvili, publicized another letter from an American Congressman. The message of the Georgian government criticism written by Rojer Vickers is dated December 19.

The letter reads that Georgia must adopt the election system desirable for society, which will ensure the development of multi-party democracy in the country.

The Congressman writes on the continuing decline from democratic values and the associated decay of its economic prosperity.

Mallin writes that he joins his colleagues in Congress, Adam Kinzinger, and Gerry Connolly in their recent letter that highlighted the concern over the decision to forego promised democratic reforms.