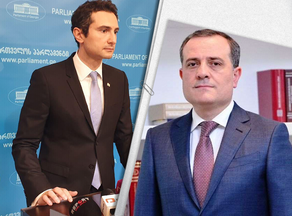 Deputy Chairman of Parliament Kakhaber Kuchava has met with Jeyhun Bayramov, the Minister of Foreign Affairs of Azerbaijan, and his delegation.

The Vice-Speaker defined the meeting as significant for deepening the relationships between the two countries, and he expressed hope that their cooperation would be fruitful in the future.

"Today, the Georgian government has hosted the Azerbaijani Foreign Minister and members of the delegation. This was an introductory meeting, and we discussed all critical issues, including our relations, mutual challenges, and various projects we plan to keep working on together. Obviously, we show readiness and are willing to strengthen our relations," Kuchava said, adding that the meeting was immensely positive, and he is certain that their future cooperation will prove even more productive.