Kaladze to Gakharia: No one has accused you of being a drug addict 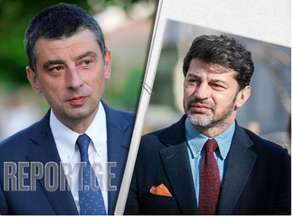 During Georgia's First Channel live debates, Former PM, and For Georgia party leader Giorgi Gakharia asked Tbilisi mayoral candidate Kakha Kaladze if he agreed with his team members' allegations that he is a drug addict.

''We have known each other for a long time, and I want to know whether you believe your current and my former team members' accusations against me. Do you agree with their allegations saying that I am a drug addict, traitor, and Saakashvili's ally?"Gakharia asked Kaladze.

''No one has accused you of being a drug addict, but as for your behavior, Giorgi, I will not hide that I did not like the decision you made in February,'' Kaladze stated.

Earlier, Georgian Dream Chairperson Irakli Kobakhidze said that Giorgi Gakharia's addiction to drugs started after he left the Georgian Dream.''Gakharia built ties with a political force that is in close contact with drug dealers, namely, cocaine. After this, his addiction developed,'' he claimed.