Kelly Degnan: We honor their sacrifices 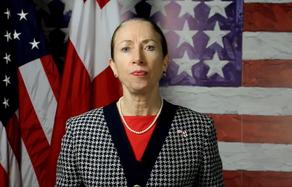 "1989 was a year characterized by courage, sacrifice, and the commitment to freedom," US Ambassador to Georgia Kelly Degnan shared on the social network.

"1989 was a year characterized by courage, sacrifice, and the commitment to freedom. From the fall of the Berlin Wall to the heroic stand of those in Tiananmen Square, the world watched as citizens stood up for democratic values.

Across the Baltic states, two million people joined hands in solidarity. In Hungary, they opened the border to Austria to hold a picnic. And here in Georgia, on the 9th of April, 21 people paid the ultimate price, while hundreds more were injured at the hands of the Soviet Army as they peacefully demonstrated for freedom. While we remember those who sacrificed so that we might have a freer, more prosperous tomorrow, let's also look forward with pride as we Americans and Georgians celebrate our shared values of independence, freedom, and democracy," Degnan stated.

Kelly Degnan laid a wreath at the April 9 Memorial and paid tribute to the memory of those tragically killed.