Kelly Dgenan: We are glad that he is attending the trial, it is his right 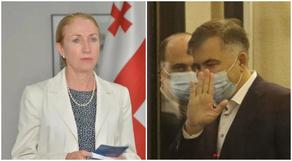 According to the US Ambassador to Georgia, Kelly Degnan, she is pleased that the third president of Georgia has been given the right to attend his trial.

At the same time, the ambassador expressed hope that Saakashvili's supporters would act responsibly and would not go beyond the forms of peaceful expression of protest.

"I hope Mikheil Saakashvili's supporters will act responsibly. They have the right to protest peacefully, of course, but the keyword here is "peaceful," and I hope they will not interfere with the administration of justice, which is also very interesting in this scenario.

We are glad that Mikheil Saakashvili's health condition has improved, and he has been allowed to attend his trial. The United States, like other countries, demanded that he attend the trial, which is his right. The Constitution of Georgia also envisages this," the ambassador said.