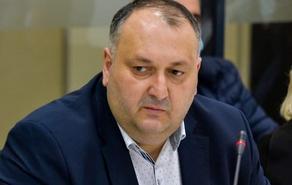 "This is yet another attempt by the miserable and criminal opposition to mislead the public," Kutaisi Mayor Ioseb Khakhaleishvili said when he responded to today's incident outside the City Hall building.

In Khakhaleishvili's words, the government will protect people in full compliance with the law.

"They are still trying to force their way into public institutions and block the buildings. They did the same during election campaigns and keep doing so," he said, adding that 'the destructive opposition will win no support.'

Civic activists in Kutaisi demanded that they be allowed to meet the mayor, but law enforcement officers blocked their path. This was followed by clashes between police officers and protesters.

Tensions were damped down later.

Protesters accuse the Kutaisi mayor of violating the regulations.