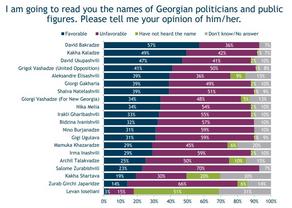 According to an International Republican Institute (IRI) survey, the top three places in the ranking of politicians belong to Davit Bakradze, one of the leaders of European Georgia, Kakha Kaladze, the Mayor of Tbilisi and Davit Usupashvili, the Leader of the Development Movement.

The percentage of other politicians:

The study ordered by IRI and funded by USAID was conducted by Baltic Surveys/The Gallup Organization, from September 11 to October 14. A total of 1,500 people were interviewed nationwide. The margin of error does not exceed +/- 2.5 %.