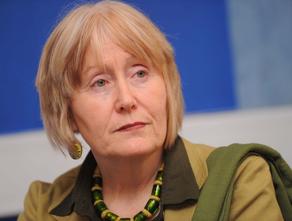 The President of NATO Parliamentary Assembly hosted the Georgian delegation.Madeline Moon recollected strong emotions that she got during her visit to Georgia in the framework of 65th Session of the Assembly.

“The things that I observed had big influence on me.It is always so when one sees the reality and concrete people’s lives.I have seen an old man who was trapped behind the border fence and had to take care of his wife with the help of his neighbors.It was very emotional visit.When I say I will never forget that means that I will never forget”, - said the President of NATO Parliamentary Assembly.

The meeting was attended by Sofio Katsarava, Chairman of Foreign Relations Committee; Irakli Sesiashvili, Chairman of Defense and Security Committee; and Tamar Beruchashvili, Ambassador of Georgian to Great Britain