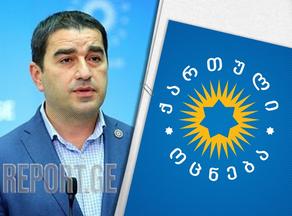 Parliamentary majority member Shalva Papuashvili says that the European Georgia party does not exist any longer.

Mr. Papuashvili defines the European Georgia as ''one man's party.''

In Papuashvili's words, members of the party decided to alienate themselves from democratic processes, and his and other like-minded people's attitude to the party which refuses to recognize democracy cannot be similar to those which do so.

The European Georgia party refuses to join the parliament.