Mdinaradze says if Gavrilov issue bothered UNM head, no bail would have been posted 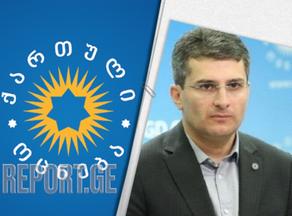 Mamuka Mdinaradze, the Executive Secretary of the Georgian Dream, says that UNM head Nika Melia is trying to pose a hero.

"If the Gavrilov issue bothered him, and you yourself can see how pathetically fake all this is, Nika Melia would not have posted GEL 30,000, and neither would he have worn the electronic bracelet. If this were unacceptable for him and the UNM, they would have expressed protests," Mdinaradze told Rustavi 2.

The parliament has stripped the UNM head of immunity. The representatives of the majority approved the decision unanimously, with a Citizen party leader Levan Ioseliani only voting against it.

The Tbilisi City Court imposed GEL 30,000 bail upon Melia as a measure of restraint on 27 June 2019. He was charged with committing a violent crime aiming to disrupt public order. The bail was increased to GEL 40,000 later, as Nika Melia refused to pay the already set amount.

The UNM head was summoned to the Office of the Prosecutor, but he refused to comply with the order. Melia was given a week to post the bail. If he refuses again, the motion seeking to send him to jail will be filed.