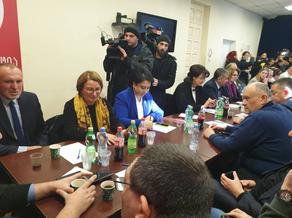 A protest rally is set to be staged at Rustaveli Avenue, according to the leaders of the opposition.

The leftist leaders discussed their future plans at today's meeting.

After the meeting, the leaders informed journalists that, along with their adherents, they would gather at Rustaveli on April 4 and introduce the public to their plans. They also intend to keep picketing the parliament and other state institutions.

Negotiations among the parties are reportedly underway, and before April 4, the agreement on all issues will be reached.