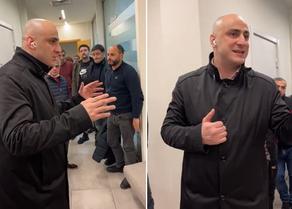 United National Movement leader Nika Melia addressed his supporters in the UNM central office by asking them to meet special forces when they appear before them to arrest him with applause.

In Melia's words, those people, 'those slaves,' would sooner or later arrive at the office and confront those who strive for freedom with tear gases and batons.

"I ask you to meet these people with applauses, songs, ovations, Georgia's national anthem for the entire world to see that on the one hand there are we, Georgian people cherishing freedom, and on the other are there are they _ Ivanishvili and Gharibashvili," the UNM head stated.