MEPs: "If you are truly Europeans, admit" 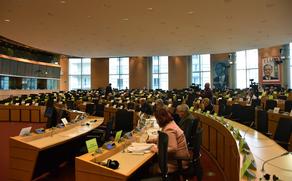 MEP Marc Gallery also made the electoral system-related remarks at the session.

"Did Mr. Ivanishvili tell you to change the electoral system, but in the background contrived the plan not to let this happen. If you are truly Europeans, admit the truth," he told the Georgian high officials.

MEP Rasa Juknevičienė declared that in the year 2020, Georgia would be put to the test.

"I am sorry to say this, but it is not good for us to hear how a representative of the ruling party complains of having bad opposition; this is against the rules of democracy," the MEP said.

MEP Maria Grigorova made a remark on blocking the parliament of Georgia.

"I hope you will objectively view my opinion and the question as I was there and talked to the pro-governmental forces, representatives of NGOs, and protesters, and they did not confirm the information on blocking the parliament. The parliament blocked itself with its disgraceful "Wall of Tbilisi." This is only the remark, however. The question I want to ask is as follows: when you say that Georgia has never been so close to Europe and the European Union, do you actually think that your political prisoners agree with this?" the MEP remarked.