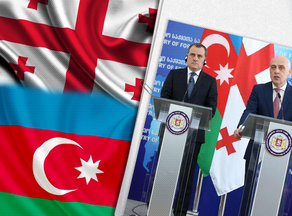 The newly appointed Minister of Foreign Affairs of the Republic of Azerbaijan, Jeyhun Bayramov, paid his first official visit to Georgia.

"During the meeting held at the Ministry of Foreign Affairs of Georgia, politicians discussed the current issues of the bilateral agenda, prospects of cooperation in politics, trade, economy, energy, education and cultural-humanitarian field, as well as the challenges facing the region. The importance of the strategic partnership between the two countries was also mentioned, which ensures the stable development of the region while gaining importance outside and inside the region.

Minister Davit Zalkaliani expressed gratitude for the Republic of Azerbaijan's unwavering position for the sovereignty and territorial integrity of Georgia. The two countries reaffirmed their interest in the peaceful settlement of conflicts and stressed the need to return internally displaced persons to a safe environment.

The conversation also covered the importance of deepening cooperation between Georgia and Azerbaijan in various formats, especially the successful collaboration between the two countries in trade, economy, transport, and energy. The Republic of Azerbaijan is one of Georgia's important trade partners, and further efforts should be made to develop the railway and transport corridors. The parties expressed readiness to continue working together to improve the countries' transit potential at the international level.

The politicians paid attention to the importance of the Baku–Tbilisi–Ceyhan oil pipeline and the Baku-Tbilisi-Erzurum gas pipeline projects. According to them, the implementation of the southern energy corridor projects will help strengthen the countries' energy security and ensure the supply of additional volumes of energy carriers from the Caspian Sea region to the European market. Zalkaliani and Bayramov discussed the process of delimitation of the state border. Two ministers expressed their sadness over the commission's meetings that did not take place due to the COVID-19 pandemic. Both sides expressed interest in actively continuing to work on the state border's delimitation and in resolving the issue within the strategic partnership between the two countries.

At the end of the meeting, the parties expressed readiness further to strengthen the strategic partnership between the two countries and take it to a higher level," the agency said in a statement.