Ministry of Justice to be involved in adoption of new parole mechanism 18 September, 2019  20:07 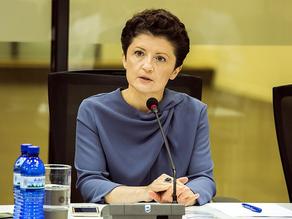 Minister of Justice Tea Tsulukiani stated that together with the Parliament, The Ministry of Justice will also get involved in adoption of new parole mechanism.

According to the Minister, a new parole procedure scheme must be formulated on time.

"It is important that the parole process is not too time-consuming, and persons, who according to the new scheme will be granted paroles, are pardoned in a timely manner. The Ministry of Justice is ready to get involved in the new parole granting model,” the Minister said.

The President has announced moratorium on pardoning prisoners, with several high-profile cases preceding the decision. Namely, the President pardoned 35 inmates on 28 August with regard to the Day of the Assumption of St. Mary (Mariamoba Holiday). The list of paroled inmates included the person convicted of the murder of policeman Tarash Mukbanian in 2014 and the person convicted of the murder of David Otkmezuri in 2004. Recently, it has become known that one of the pardoned inmates has been wanted since 2009. The decision by President Zurabishvili sparked a backlash from the public and politicians.