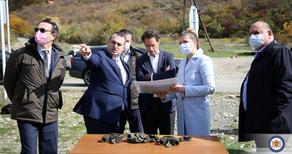 Javier Colomina, the NATO Secretary General's Special Representative for the Caucasus and Central Asia, has visited Georgia within the framework of the regional tour.

The NATO Secretary General's Special Representative arrived in the Odzisi village near the occupation line, where the first deputy foreign minister Lasha Daraselia introduced him to the existing situation.

Following this, Mr. Colomina said that he was greatly impressed with everything he had heard near the occupation line. In his words, information on the current humanitarian situation near the occupation line and the fact that the administrative border splits the families there is crucial. ''Installation of barriers is especially concerning for NATO as this indicates that Russia has no respect for the international agreement. We must support all efforts and international negotiations to tackle the issue,'' he said.

According to Lasha Daraselia, the fact that NATO Secretary General's Special Representative started his visit in Georgia with the occupation line is critical as this reaffirms NATO's support for Georgia.