NDI: The majority thinks excessive force was used on June 20 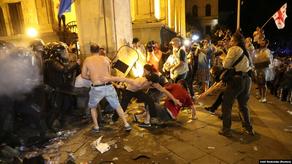 According to the NDI survey, most of the respondents believe that the authorities used excessive force to crackdown the June 20 protest.

Specifically, 68% of respondents said that the government used excessive force on June 20, 22% thinks that the power used by the government was appropriate, 4% disagreed with both opinions, and 6% answered "I do not know".