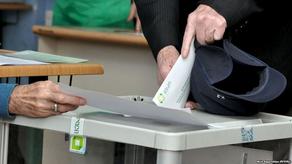 When asked by the National Democratic Institute poll if parliamentary elections were set tomorrow what parties would people vote for, the answers were as follows: