New bill based on German system registered in Parliament - PHOTO

New bill based on German system registered in Parliament 4 December, 2019  17:22 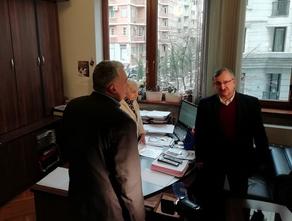 "This is a project that addresses precisely the reform we are talking about. It incorporates the German principle that all parties will be represented in parliament according to what proportion of  votes they receive. The bill is initiated by European Georgia and National Movement. 30 political parties and their leaders are authors of the bill as well", Kapanadze said.