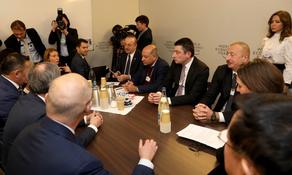 Within the World Economic Forum in Davos, Georgian Prime Minister Giorgi Gakharia has participated in the discussion called New Vision for Europe and Asia -- Partnership for Sustainable Development.

Azerbaijani President Ilham Aliev, President of the European Bank for Reconstruction and Development (EBRD) Suma Chakrabarti, President of Mongolia Khaltmaagiin Battulga, Turkish Foreign Minister Mevlut Cavusoglu, and others were present at the meeting.

At the meeting, the world leaders and top officials exchanged their views on prospects of development of the relations between Europe and Asia.

The meeting aimed to discuss the region's pace of development in consideration of the status quo and its economic and technological potential.

The Georgian PM underscored Georgia's critical role in building economic, political, and cultural links between the two regions, the existing beneficial environment in Georgia, and its favorable geographical position enabling the country to connect the largest economic players and guarantee people's wellbeing in Georgia and the entire region.