Nika Gvaramia: Armenia and Russia are occupiers, that is the truth 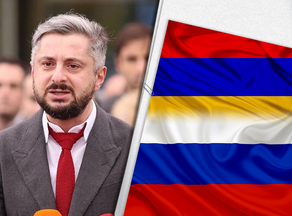 Nika Gvaramia, the founder and director of TV Channel Mtavari Arkhi, agrees with the assessment of the third president of Georgia, Mikheil Saakashvili, regarding the Nagorno-Karabakh conflict and says that a Russian-Armenian tandem occupies Nagorno-Karabakh.

According to him, international law and the community states the same.

"I totally agree. Karabakh is just as occupied by the Russian-Armenian tandem as Russia occupies Ossetia and Abkhazia. A citizen of an occupied country has no right to say otherwise. Armenia and Russia are the occupiers of Karabakh - this is the truth.

Bringing out the equivalents of this truth in electoral votes is dishonesty. And finally, decide on what you want from Saakashvili, truth, half-truth, or silence. Also, look at the voting results in neighboring Armenia regarding Abkhazia and Ossetia at the UN. Then look at Azerbaijan," Gvaramia wrote.

Mikheil Saakashvili wrote that Nagorno Karabakh is the territory of Azerbaijan, and nothing can change that.