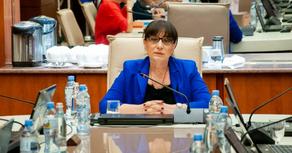 The Bureau will receive the committee's report today. They will then decide when the matter will be voted at the plenary session.