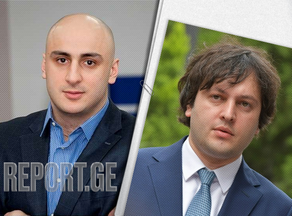 Melia and Kobakhidze physically and verbally abused each other.

Politicians were commenting to the media when Nika Melia approached Irakli Kobakhidze and demanded an answer to a statement by Georgian Dream leaders claiming that opposition supporters had wounded each other in Dmanisi.

Melia asked Kobakhidze if he believed that opposition activists in Dmanisi had wounded each other, leading to a confrontation between politicians.

When Melia approached Kobakhidze and demanded an answer, Kobakhidze accused him of organizing a provocation. They verbally abused each other and cursed.

People on the ground tried to release the tension between the politicians.

Political leaders are meeting with ambassadors at the EU office today. Irakli Kobakhidze has already left the territory. At the moment, the opposition is meeting with the ambassadors of the EU countries.