Ombudsman of Ukraine: Mikheil is weakening, he had four crises 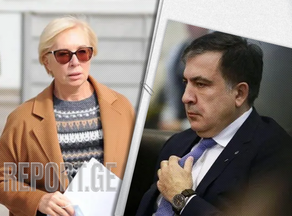 "Mikheil greeted everyone. He said that he is getting weaker every day and had four crises. Two - hypertensive and two related to blood," the Public Defender of Ukraine, Lyudmyla Denisova, told journalists after visiting the former President Mikheil Saakashvili in the penitentiary today.

According to her, Mikheil Saakashvili refuses to go to the prison hospital because he thinks it is not safe.

"The resuscitation team is on duty at the door of the colony to transfuse blood when necessary or to do a heart massage. If restoration of any important organ function becomes necessary, they will not be able to do so. He says he will not move to the prison hospital, which is located in the 18th facility, because he believes it is not safe for him. In addition, when my colleague, the Public Defender of Georgia, inspected the hospital, she confirmed that it did not have the infrastructure needed to provide emergency assistance, which could result in starvation at any time of the day, so he refused to move," noted the ombudsman of Ukraine.

The ombudsman also noted that a Ukrainian doctor had arrived and that he plans to visit Mikheil Saakashvili.