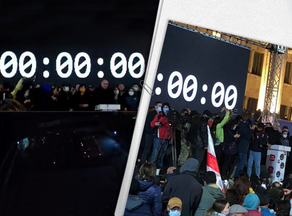 The ultimatum, put forward by the Georgian opposition to the government, expired at 20:00.

Opposition politician Nika Melia says that the communication took place between the opposition and the ruling Georgian Dream party before the expiration.

The leaders of the Georgian Dream proposed to the opposition to hold a dialogue tomorrow, Melia said.

In his words, while thousands of people are outside, it is unacceptable to postpone the dialogue.

Melia stressed that the conversation should take place today.

He called on the protesters to move from Rustaveli Avenue to the CEC building, not to allow anyone to enter or leave the building.