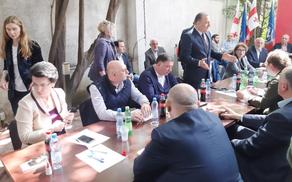 "The President's decision to release Gigi Ugulava and Irakli Okruashvili is an important step towards fulfilling the March 8 agreement. We hope that Giorgi Rurua will soon leave the prison, and after that, the Parliament of Georgia will adopt the agreed constitutional amendments. In doing so, the country will move towards a proportionate and fair electoral system. After the government loses the elections, the democratic government must pull the country out of the current economic path and take key steps towards independence of the judiciary, so Georgia does not face the challenges of politicized justice and the existence of political prisoners in the country. We, the opposition parties, decided to coordinate with each other to achieve these goals. Our task is to make all changes in Georgia only within the constitutional framework," reads the statement.