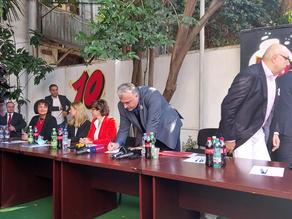 Representatives of opposition parties signed a memorandum in the office of the Labor Party.

Opposition leaders have signed an agreement not to form a coalition government with Bidzina Ivanishvili's Georgian Dream.

2. It has cast a shadow over Georgia's international reputation and hampered the ability of Georgian people to make historic European choices, including in the process of joining Euro - Atlantic structures;

3. Damaged Georgia's strategic economic prospects, including by halting the construction of the Anaklia deep-water port and artificially removing Western investors from the project;

4. Under the disguise of the "normalization policy," weakened negotiating position with the Russian Federation by giving up Georgia's national interests on de-occupation issues.

We declare that as a result of the parliamentary elections of October 31, 2020, we will not form a coalition government under any circumstances with Bidzina Ivanishvili's Georgian Dream.

The political opposition is convinced that with the will of the Georgian people, it will win in the October 31 parliamentary elections and form a government endowed with the Georgian people's trust for the benefit of the country," the memorandum reads.

As the opposition explains, this will be a clear message to the voters about which party is the real candidate for a change of government. About ten opposition parties signed the memorandum.