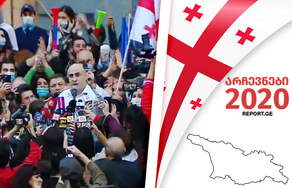 One of the United National Movement party leaders and the majoritarian candidate in Gldani, Nika Melia, in protest, took off the electronic bracelet that was put on him by a court order.

He took off and threw the bracelet away as he was delivering his speech at a protest rally in Tbilisi, in front of the Parliament building.

In summer 2019, Melia faced charges with organizing, leading, and involvement in organized violence during June protests.

Melia was sentenced to wear an electronic bracelet for monitoring on July 3, 2019.