Opposition refuses to vie for votes in runoff elections 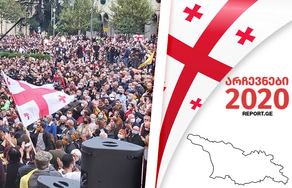 The opposition has refused to participate in the runoff elections.

"Bidzina Ivanishvili must see that the stance we have taken can be shown through protests. The CEC must be restructured, and all people distanced from us who are prone to giving bribes. Against this backdrop, the participation in runoff elections is pointless," Elene Koshtaria, the majority candidate in Vake district, declared at the protest rally.

As per the CEC results, both Elene Koshtaria and a Georgian Dream candidate won enough votes to take part in the runoff. The rating of a leader of the European Georgia is 35.51%, while Nodar Turdzeladze's, who represents the Georgian Dream, 41.88%.