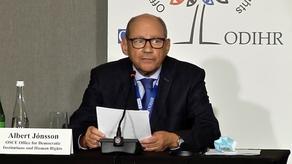 According to Albert Johnson, Head of the OSCE Observation Mission, the runoff elections in Georgia were mainly technically well-administered; however, continued polarization and negative rhetoric have marred the process.

In Johnson's words, the election campaign was competitive, covering the entire country, but complaints concerning instances of intimidation and pressure exerted on some people also persisted. Additionally, insufficient supervision resulted in restricted liability and finance-related issues being not so transparent.

According to the Head of the OSCE Observation Mission, private TV companies also promoted high polarization levels, adopted a biased approach, and by doing so, prevented the electorate from making an informed choice.

Johnson stressed that despite election day being peaceful overall, specific procedural issues emerged, especially during the vote-counting process. As he said, representatives of different organizations interfering in the process, and some groups of people allegedly trying to influence voters outside different polling stations were concerning.