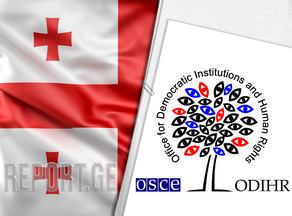 OSCE-ODIHR has addressed the Georgian government with several recommendations to be followed during the next election process.

“These recommendations, as contained throughout the text, are offered with a view to enhance the conduct of elections in Georgia and to support efforts to bring them fully in line with OSCE commitments and other international obligations and standards for democratic elections,” the ODIHR final report on Georgia’s parliamentary elections reads.

The eight recommendations are as follows:

1. To ensure a coherent and stable electoral framework, the legislation should be reviewed to bring it further in line with OSCE commitments, international standards and good practices, well in advance of the next election period and within an inclusive consultation process.

2. The composition of the election administration could be reconsidered to increase its impartiality and independence. The appointment formula could be revised to ensure more balanced political representation and to prevent factual dominance of a single political parties.

3. To further increase transparency and confidence in the election administration, the Central and District Election Commissions should consider discussing all substantive matters collegially and in public sessions.

4. To ensure public confidence in the electoral process and the protection of fundamental rights, the relevant authorities should take prompt and effective steps to properly investigate allegations of voter and campaign staff intimidation.

5. The electoral dispute resolution framework should be reviewed to simplify the process and broaden legal standing to ensure that citizens whose electoral rights are violated are entitled to lodge a complaint to seek legal remedy.

6. To further increase transparency and confidence in election dispute resolution, all election disputes should be handled by commissions collegially and in open sessions. To guarantee an effective remedy for election disputes, the law should provide for the right to seek judicial review of all decisions and (in)actions of election bodies and their officials.

7. To ensure transparent, fair and uniform practice in handling post-election complaints, the Election Code should specify clear, objective criteria for granting and conducting recounts and annulments of results. District Election Commissions should be sufficiently staffed and trained to effectively handle complaints and conduct thorough investigations of all irregularities raised.

8. The existing system for the allocation of free air-time and disbursement of funds for advertising should be reviewed to provide equal campaign opportunities to all contestants.