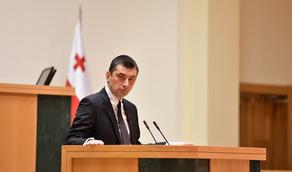 The Parliament of Georgia is listening to Giorgi Gakharia, the Prime Minister of the country.

The Prime Minister will submit an annual report to the Parliament.

Despite the boycott regime, the United National Movement and European Georgia are attending Gakharia's speech.

It is the third visit of the Prime Minister to the legislature recently.

The Prime Minister visited the Parliament twice last month. On May 27, Giorgi Gakharia presented his report, and on May 29, he attended the legislature within the framework of the interpellation rule.