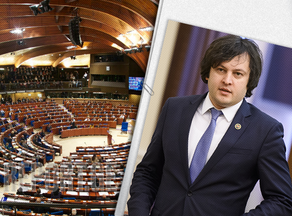 The Parliamentary Assembly of the Council of Europe has elected Irakli Kobakhidze as Vice-President for a second term. Kobakhidze held his first meeting as Vice President with the President of the Assembly, Rik Daems.

According to Givi Mikanadze, First Deputy Chairperson of the Georgian Dream parliamentary faction, the conversation focused on cooperation between the Parliament of Georgia and the Parliamentary Assembly of the Council of Europe. The current processes in Georgia were discussed.

"From the position of Vice-President, he will be able to oversee important and key areas related to the country's sovereignty, support for its territorial integrity, and various important reforms over the next four years. This will enable Georgia to submit a full application for EU membership in 2024," Givi Mikanadze stated.

The Deputy Chairperson of the Parliament of Georgia, Kakha Kuchava, made the statement as well.

"The support of the delegation is very high from the Assembly. Of course, this is another opportunity for us, already on behalf of the Bureau or any other format, to raise issues that are important for Georgia, and gain support," said Kakha Kuchava.