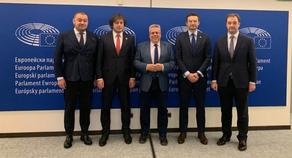 The Georgian parliamentary delegation headed by Irakli Kobakhidze is holding meetings in Strasbourg and Brussels.

The delegation composed of Georgian Parliament Vice-speaker Kakha Kuchava, Chairperson of the Committee on European Integration Davit Solghulashvili and Chairman of Diaspora and Caucasus Issues Committee Beka Odisharia has met with The Secretary General of the Council of Europe Wojciech Sawicki.

The key issue on which the meeting focused were activities to be implemented by the Georgian delegation in the Council of Europe. The Georgian party also notified the Secretary General of the current situation in the breakaway regions of Georgia and the existing political situation in the country.