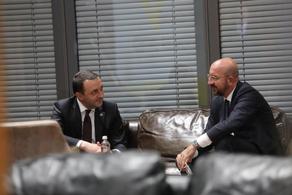 Georgian Prime Minister Irakli Gharibashvili has met with European Council President Charles Michel in Kyiv, Ukraine. Head of the Strategic Communications Department of the Government of Georgia, Nino Giorgobiani, has spread this information on social media.

The Delegation of Georgia visited Ukraine on 21 August.

The Georgian PM participated in the Crimean summit.