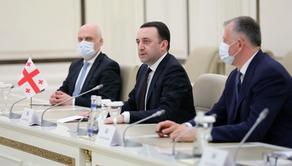 After the meeting with Chairwoman of Milli Majlis Sahiba Gafarova, Georgian Prime Minister Irakli Gharibashvili said that they support peace in the region, which can be achieved through peaceful resolution of conflicts and negotiations.

The Georgian PM reaffirmed Georgia's friendship with Azerbaijan and thanked the Azerbaijani government for hosting the delegation of Georgia.

According to him, official visits must become more frequent, and relations between Azerbaijan and Georgia further strengthened.